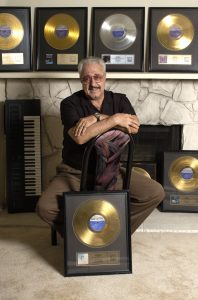 Jerry has worked in every aspect of the music business in creative or management roles over the last 45 years. A highly respected member of the music industry, he has served three terms as an elected Governor of the Board of NARAS (The Grammy Organization), LA Chapter. Jerry understands the “creative artist”, having toured as a musician, singer, songwriter and recording artist with such labels as Warner Brothers Records, A&M Records and Liberty Records. He has worked with and helped develop such greats as, Michael Jackson, Smokey Robinson, The Four Tops, The Jackson Five, plus many others, with his talents as a songwriter and producer. His writing and producing skills have credited him with 3 Platinum and 17 Gold Albums, plus 6 Gold Singles

Craig is a Las Vegas native. After a career in law enforcement, Craig has owned several nightclubs and other businesses with his brothers in various states around the US. In addition to organizing security for several concerts, Craig is a seasoned performer in his own right. Craig has sung in many venues in several states, in addition to appearing at multiple clubs in the Las Vegas area. Craig is a published author and a published          songwriter. He is a member of BMI.

Roy is a graduate of the University of Nevada, Las Vegas. Roy had a career in law enforcement before entering the business world. Besides owning several nightclubs with his brothers, Roy has a diverse background including competing as a professional rodeo cowboy. Roy has owned and managing a successful business in three states for over 20   years. Roy is a published author and a published song writer. Roy is a member of BMI

Leo is a self-taught creative artist. Besides drawing, he also likes to paint and work with wood, metal and, clay. Leo has traveled the world and is also a pretty good rapper.